Be Super Creative in Christ for a New Season (Ep 249)

Be Super Creative in Christ for a New Season (Ep 249)

The Person Who Gains Souls Is Wise — Jesus Espresso (Ep 247)

The Adversary gains advantage against us when we give him ground.

There was no anger in Jesus … no lust, bitterness, disobedience, or anything not in harmony with the Father’s design. The devil had no ground against Jesus.

The devil cannot overcome us unless we give him the ground to do so.

“How do we defeat the enemy? Our victory begins with the name of Jesus on our lips, uttered in fervent prayer. Our triumph is consummated by the transformation of our nature, where Christ Himself dwells as Lord in our hearts.”  ― Francis Frangipane

“The reason for many people’s discouragement and defeat is because at some point, they are not in right alignment with the Lord’s ways—either because they don’t realize it or due to outright disobedience. Learning how to align in God’s ways is essential to establishing a life that is efficient in moving on in the victory Jesus has for us.” — Jack Hayford

Resource to Go Deeper — Shut the Door, Keep Out the Devil

The Three Battlegrounds: An In-Depth View of the Three Arenas of Spiritual Warfare: The Mind, the Church and the Heavenly Places by Francis Frangipane 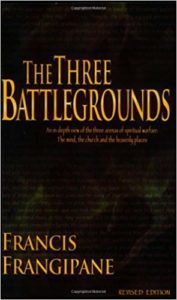 Any time the Spirit of God’s kingdom is truly manifested in the earth, it will ultimately confront the strongholds of hell. Indeed, wherever evil spirits have either a foothold or a stronghold, you can expect that the overcoming church will be engaged in warfare, and expect also that the gates of hell will not prevail against the church that Jesus builds. Francis Frangipane explores three arenas of spiritual warfare that the maturing Christian will face: the mind, the church and the heavenly places. It provides a foundation of insight, wisdom and discernment on the nature of the battle and the keys to victory. (Description via frangipane.org / arrowbookstore.com)

Penetrating the Darkness: Discovering the Power of the Cross Against Unseen Evil by Jack Hayford

Evidence that evil is flourishing faces Christians every day, leaving many feeling hopeless and helpless. What they don’t realize, says esteemed pastor Jack Hayford, is the power that is theirs through the cross. Instead, they labor under the misconception that spiritual warfare occurred only during biblical times. But it is right here, right now, says Pastor Jack. And for the first time he lays out the strategies he’s learned for engaging and defeating evil–through prayer. (Description via Amazon) 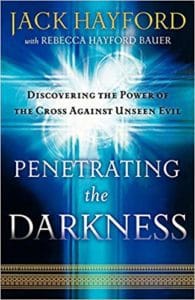 We’re resolved that Jesus Christ is the most brilliant person to walk the planet! He knows how life works best. And the future belongs to him … and those who follow him.

Stellar guests are on the docket. And we’ll be questing after Kingdom themes — what Jesus taught and modeled.

Be smart. Subscribe and stay connected with your favorite podcast platform.